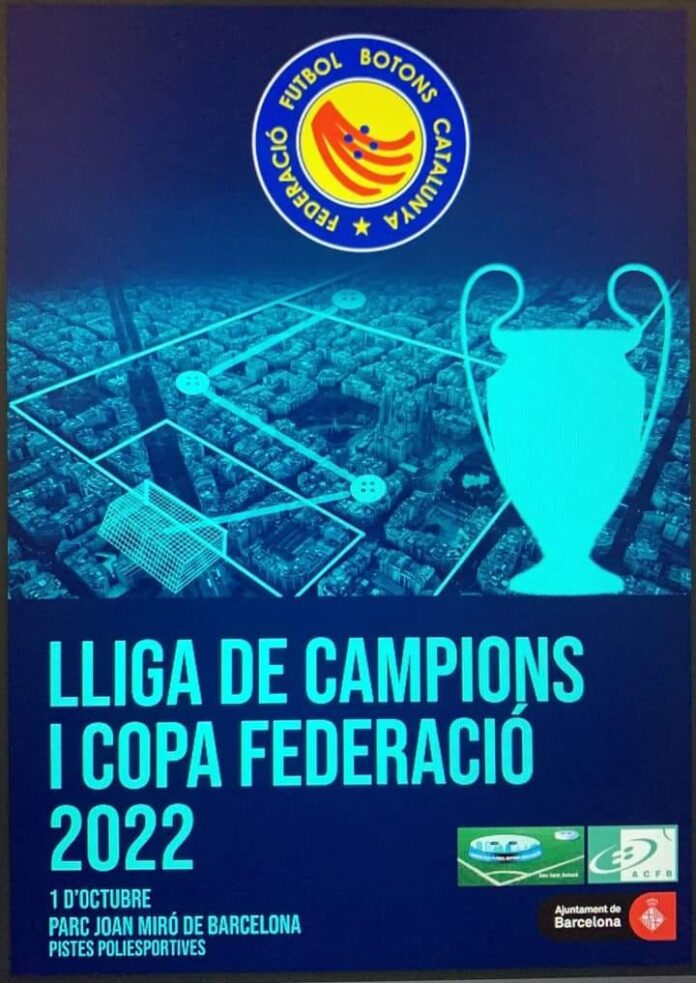 Please find below the invitation letter to the upcoming Catalan Champions League and Federation Cup which will be held in Barcelona Spain on 1st of October 2022.

Once again, this event will be held at the Joan Miró Park in Barcelona, on 1st of October 2022

Due to COVID-19 we will put all our efforts into giving the greatest security to the players,, and we
will follow all the recommendations of the health authorities so that we can enjoy a day with
maximum safety.

We have the support and authorization of the Barcelona City Council and the Eixample Left District
to carry out this event, and we will keep you informed of any news that may occur in this regard.

We want to invite you to participate and, after the holidays, make the first great meeting of the
football season buttons, with passion, competitiveness and joy.

As is tradition, participation in the Champions League and Federation Cup is limited in the number
of participants, and the number of participants will be defined according to the criteria established
in the FFBC Competition Regulations.

The regulations of both tournaments will be the official of the Football Federation Buttons of
Catalonia version without “Neutral Zone” as played in the associations BFBA, EFBA or SJFBA

As is tradition it is our desire to be very careful with the aesthetic aspect and give the best possible
image, for this reason all players must wear the same uniformity as the other participants of their
association.

As in the last editions this year, a Children’s Champions League will be organized for the children
and that will be played in the afternoon after the First Qualifying Round.

In case in this turn the button that has above or under the ball is not taken from above or below
the ball, it will be considered an indirect free kick, this button will be delayed 8 cm. (4 fingers) in
the direction of the center of your goal, the serve will be with the right to pass but to shoot on
goal you will need a second pass.
A button with the ball on the button can shoot at goal on its own impulse and the goal will be
considered as valid.

At noon, we will give freedom for everyone to choose the place to lunch, instead of the traditional
brotherhood meal.

Already in the last edition the monitoring with screens of the tables of the tournament was
improved, in the next edition this aspect will be improved and we will have 3 monitors of 27 “and
a monitor of 22″.

We will have a lighting with LEDs through the field where the different finals will be played.

We plan that the different finals will have a referee and video monitoring for the consultation of
the VAR type plays.

The breakfast will be assumed by the organization with snacks and drinks available for the
players in view of the fact that in previous editions it has been a topic that causes delays in the
development of the tournament.

The chronometer of the tournaments will be made with a new system, a video that already has all
the matches scheduled to guarantee being able to meet the pre-established schedules.

Pep Calm “Buttons a Sak” will carry the necessary tools., and during the development of the
tournaments will be modified buttons for free to make them suitable for play, so you can take
the haberdashery buttons you have and the Pep will transform them into “Great Players”.
Essential conditions:
Hand the buttons to Pep before the tournaments start.
You can wear as many buttons as you want, and Pep will choose which ones he thinks he can do
during the day. Pep’s criteria for choosing which buttons you can do will be that you can all have
some button modified, the quality of the button and the time it is estimated that it will take to do
so.

As in the previous edition, the teams that do not qualify for the final phase of the Champions
League and Federation Cup will play the Recopa and Joan Mirò Cup tournaments scoring by the
federative ranking. These last tournaments and the Federation Cup will have their own trophies
and that in an itinerant way will belong throughout the season to the winners, being returned for
the next edition next year, in the same way that we have already done this season with the
Champions League Cup.

As is tradition at the end of the tournaments, there will be a medal for all participants. But in this
edition and as a novelty, all participants will receive a gift, several products will be raffled,
among others, a ham, a box of buttons, an FCB shirt, surprise gifts and exclusive buttons.

The price of the tournaments will be 10 euros for adults and 5 euros for children under 18 years
old.

We hope that this call encourages you to come and participate, in competitions that were already
a success last season and that have already become a classic in the world of Football buttons and a
meeting point for friends of football players buttons.

You can’t miss it!