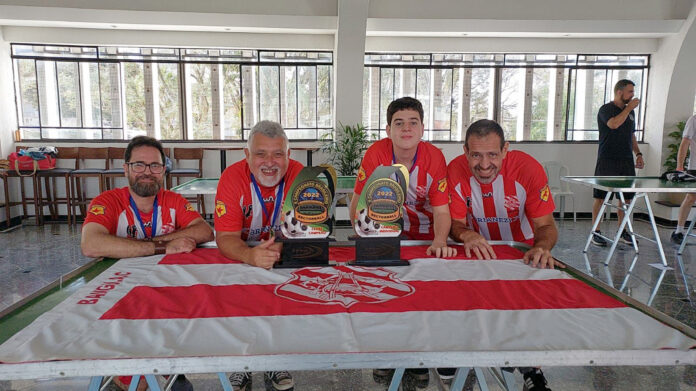 The Bangu Atlético Clube, from Rio de Janeiro, was the great champion of the X Sectorball’s Brazilian Championship, played on July 23 and 24 at the Moisés Lucarelli Stadium, owned by Ponte Preta, in Campinas. Won the individual and team competition, a historic feat.

On Saturday, the Bangu athlete Weber Gomes became champion by overcoming Robson Marfa, representative of Botafogo, in the penalty dispute (shoot-outs), thus marking his fourth conquest in the individual category. The game ended in a 0-0 draw and, in the shoot-outs, Weber won by scoring a goal in the alternate dispute after more than a dozen charges.

The championship was attended by thirteen athletes. Six from Rio de Janeiro, six from São Paulo and one from Rio Grande do Sul, which were distributed in two groups, one with six players and the other with seven.

At the end of the first phase, the top four of each group qualified. Alencar (Corinthians), Cristiano (Ponte Preta), Igor (Vasco), Luisinho (Bangu) and Júnior (Bangu) were left out of the quarterfinals.

The eight classified were matched according to the criterion of best campaign. The best overall, Rodrigo Villanova, from the Zona Sul of Porto Alegre, faced Marcelo Aranha, from Ponte Preta, who had the eighth best campaign. The game ended tied at 0-0 and Aranha won the shoot-outs 3-0. The other games were between Weber (Bangu) 3-1 against Vinícius Rolim (Corinthians), Robson (Botafogo) winning the shoot-out Marcelo Coutinho (Bangu) after a draw in zero to zero, and Maurício (Ponte Preta) losing to Renato Barthez (Maria Zélia) by 1-0.

The semi-final pitted Barthez and Robson. The game ended with a score of 4-0 for the Botafogo athlete. In the other match, Weber (Bangu) defeated Aranha (Ponte Preta) by 1-0.

The grand final had no goals and the shoot-outs had great tension, reaching more than a dozen alternate charges between the two athletes. Robson wanted the third championship, to match Weber. The Bangu’s athlete wanted the dreamed fourth championship, which came in a frontal shot that entered to the left of the goal guarded by Robson’s goalkeeper.

On Sunday, the Bangu team won the club title by beating Ponte Preta 4-1. The two clubs played exceptionally with 3 athletes on each side in 3 rounds, in which they all faced each other in 9 games.

The modality determines that the team games are played between 4 players in only one round, but Bangu demonstrated chivalry and sportsmanship by suggesting that the match was held with 3 athletes on each side, since the team of Ponte Preta was composed of this number of players.

The first round ended 2-0 for Bangu, with wins by Luisinho against Aranha, by 1-0 and Weber against Cristiano, by 3-0. The game between Coutinho and Maurício ended tied at 0-0, which does not confer points.

The second round confirmed Bangu’s favoritism. Victories by Weber (2-0 against Aranha) and Coutinho (3-0 against Cristiano) built the score to 2-0 for Bangu. The third game, between Luisinho and Maurício, ended in a 0-0 tie and the victory ensured the title for the Rio de Janeiro team, as Ponte could only reach 3 points in the last round.

Ponte won 1-0 in the third round of the match, in which Aranha drew with Coutinho in 1-1, Cristiano drew with Luisinho in 0-0 and Maurício beat Junior 3-0. The round ended 1-0 for Ponte and 4-1 in the overall score. Red and white party in the noble hall of the Moisés Lucarelli stadium!

CBFM took the opportunity to honor the athletes Robson and Coutinho with a commemorative plaque, since the two are the only players who participated in the ten editions of the Sectorball’s Brazilian championships.

After the end of the Sectorball competitions was held, with the support of the national coordinator of the Old Style Buttons rule, Rodrigo Villanova, the 1st Macaca Open. Formerly known as the Catalan rule, the modality has gradually expanded around the world and is already played in several countries. In order to publicize the Old Style, the competition did not offer prizes, but was loaned to interested parties all the equipment necessary to play the tournament that for many was the first contact with the new rule.

The Rio de Janeiro had three of its athletes on the podium, but the champion was Rodrigo Villanova (Zona Sul, of Porto Alegre), winning Marcelo Coutinho (Bangu) in the final. Weber Gomes (Bangu) and Igor Monteiro (Vasco) completed the podium. As a third-place decision was not disputed, the two were declared third-placed.